Surf Season - When is the best time to surf? 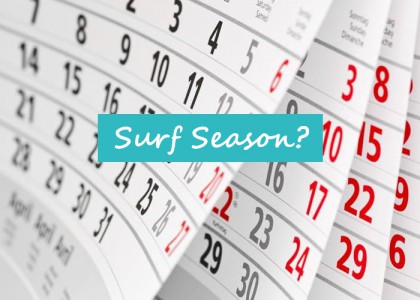 Quite often you can read the question of when is actually surf season and the best time to surf in a specific country. So e.g. when is the surf season in Bali, Sri Lanka or in Costa Rica?

// Scroll to the surf season table

When is the surf season in a specific country?

Of course, this question is not always answered flat rate, since good waves depend on a few factors that are also quite weather-related. And in times of climate change, we all know by now that the weather and the seasons are starting to shift a bit.

But on the basis of the historical statistics and the discussions with the various Surfcamp providers and Surfschullehrern locally one can say at least in which period of the yearly one has high chances on good surfable waves in the appropriate countries. When there is usually the best time to surf, you will find below in the table.

How do you get good surfable waves?

In order to understand how useful and good waves are created for surfers, we first have to make a little digression in the matter of wave science.

The following important factors influence whether and when good waves arrive at the coasts:

As you can see, a number of important sea and weather factors play a major role in the creation of clean, well surfable waves. Therfore the best surf season in a country can not be defined as 100% based on season or months.

Overview of the surf season and recommendation for the different countries

In the following article you can read how to find a suitable surfcamp for your surf-level and your needs.

And if you are a beginner in surfing you should read the next article about where learn to surf as a beginner.