The Rules for Surfing 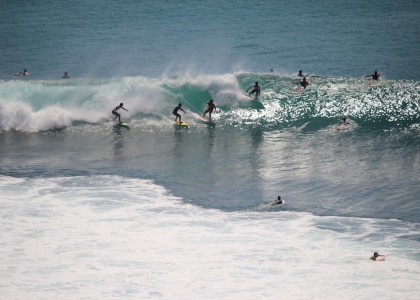 As in any sport, there are also rules for surfing! These rules must be strictly adhered to, so that one does not unnecessarily endanger oneself and other surfers or makes enemies in the line-up by a wrong behavior in surfing.

The most important rules for surfing

The right of way rules

Of course, the most important thing is the right of way to avoid risking dangerous accidents and not to take the wave away!

Avoid the following beginner mistakes!
By no means just stay rooted in the water and wait and see what happens after the motto "He will dodge and surf around me". No, he will not, because it is his wave at the moment and you also have a limited field of view when fast rippling a wave and sometimes see the obstacles very late. Just stay where you are, when you can clearly judge that you are still far enough away from the oncoming wave and the surfer, so he can still drive past you.
And not just continue paddling in his direction, because you think you can do it over or under the wave even before him. Unless you clearly see that he is still far enough away from you, that he has definitely already passed you by when you arrive at the wave.

Understand and follow these rules of surfing and there will be nothing in the way for a good surf!