Surfing and surf camps in Morocco 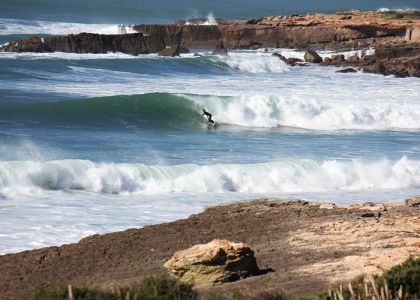 The National Geographic magazine named the coastal town of Taghazout in southern Morocco one of the 20 best surfing sites in the world. For this reason, it is no wonder that there are also surf camps in Morocco like sand on the beach.

In addition to the popular surf spots in France, Portugal, or Indonesia, the surfing oasis in Morocco has also been able to secure a place in the hearts of surfers worldwide.

But surfers all over the world are not the only fans of Taghazout: surfing in Morocco is ideal for advanced skiers and fans of popular water sports. Even surfing learning in Morocco is no problem thanks to the many excellent surf camps in Morocco.

In the following article you will find an extensive overview of the country, culture and climate, important travel information and the ultimate overview about surf camps in morocco. With our special and worldwide surf camp search tool you can search for the best suitable surf camp in morocco fitting to your needs. 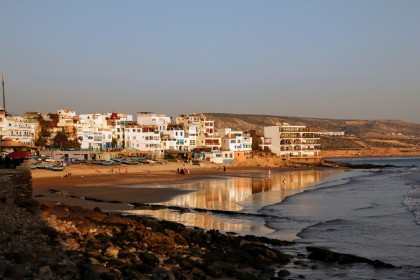 The idyllic fishing village of Taghazout on the Atlantic coast has just under 5,000 inhabitants. The former forepart of European sea adventures and conquerors who immigrated to the North African country, has lost none of its traditional adventurous flair to this day. In the mid 90's surfers found the fabulous location of the region.

The village gradually became a hotspot for surfers from all countries. Over time, the village became increasingly popular among professional athletes and beginners alike. Learning to surf in Morocco travelers on the border town on the edge of the desert can be just as excellent.

The long-running waves provide excellent quality and also relatively powerful by the constantly blowing winds on the Atlantic coast.

Well-known surf spot for surfing in Morocco is the Killer Point. The name should not be underestimated, because the waves are brutal, strong and high. When Devil's Rock it looks hardly different, here the waves come in part from different directions and are unpredictable. Both Surfspots are only recommended for advanced surfers.

On the so-called Banana Beach, surf beginners are also in good hands: learning to surf in Morocco is especially fun here and is easier because of the softer waves.

Another popular Surfort, also particularly suitable for surfing in Morocco, is Essaouira. The breathtaking place is a UNESCO World Heritage Site. In the morning, the waves are best for surfing and the beaches are not crowded. Later in the day, more wind and kite surfers populate the spot because of the stronger winds.

Surfing in Marroko is also an absolute dream on the beach of Imessouane. Superbly located between Essaouira and Taghazout, smooth longboard waves provide neat kicks for beginners and advanced riders alike. Directly in Essaouira itself is also a good beach section for newcomers among the surfers: Here you can learn relatively relaxed surfing in Morocco.

Fortunately, your surf addiction is not only satisfied in the surfer stronghold Taghazout. Surf camps in Morocco are more widespread than one would expect. Whenever the surfing traveler has time and leisure, Morocco offers surfers around the year perfect and steady waves.

Hundreds of sandy beaches along the ocean provide ideal conditions for surfing. The boardwalks are lined with surf camps, restaurants and cafes with fabulous ocean views.

Accommodation and food in a surf camp in Morocco

Surfing in Morocco scores by being able to surf here all year round. So what can a typical day look like in a surf camp in Morocco? In fact, there will usually be a small schedule that surfers do not have to adhere to strictly if for whatever reason they are not. In most cases, a timetable will simplify the process and ensure a regular course of events.

A good surfing day starts here very early. The surf camps in Morocco offer a rich breakfast for the athletes in the early morning hours. Immediately thereafter, we start and drive to the beach together with the group and the teacher.

Most surfers return to the lodge in the late afternoon hours and prepare for dinner at the camp. Surf camps in Morocco often offer half board. Sometimes, combined with surfing the night before dinner, there are also yoga classes offered by professional yoga teachers.

The Yoga & Surf Camps in Morocco offer the perfect balance between active holidays and deliberate healthy lifestyle for body and soul. In such a surf package is just about everything, what the athlete's heart desires, get. Optionally available and chargeable are other sports courses or dinner. This can be especially beneficial if you prefer to explore the city in the evening and try out local restaurants.

Whether surfboard or wetsuit: As a rule, all surf camps in Morocco provide the necessary equipment for surfing. The rent can be up to 100 MAD, about 9 Euro, per day and is without hour limit. In Morocco, action is commonplace. You can also negotiate the rental prices of the surfing equipment. This is especially useful if you want to rent a long term surfboard or wetsuit in one place.

Normally, most surf camps in Morocco have small apartments that are equipped with everything you need to live everyday. If you are lucky, travelers from the bedroom window have a fantastic view of the Atlantic Ocean and the waves. Some surf camps in Morocco also have balconies directly above the water: absolutely magical!

The surf instructors of the surf camps in Morocco do not always bring their charges to the nearest beach to surf. It is driven to the coastline nearby, where the best waves of the day are expected to be found. As is known, the perfect place to surf can change from day to day, depending on wind and weather.

So the surf holiday guests have the unique opportunity to surf and relax on different beaches around the surf camp in Morocco.

Depending on the progress, the surf campers are divided into various small groups and in the beginner groups on the first day of the campus in the basics of surfing inaugurated, and then try the exercises gradually in the water. The teachers always offer help and advice on what to improve and also act as helpers in times of need.

Culture and culinary - What else is there to discover! 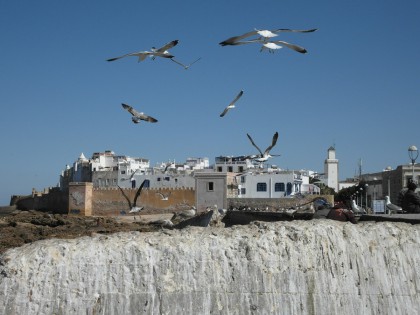 The Moroccan culture is one of the richest and oldest in the world. To keep your surf vacation in mind for the rest of your life, we've picked out some tips and highlights for you to explore after your surfing experiences.

Ordering Tagine, the hearty Moroccan cuisine stew, in a genuine Moroccan eatery is a culinary must when staying in Morocco. The dish, traditionally prepared in a large clay pot, strengthens you and your surf buddies extensively and gives you energy for the next round on the water.

The local panacea is called argan oil in Morocco. The well-known oil is considered in Morocco as a miracle cure that is good for everything; from cooking with special edible argan oil to the hair conditioner with the fragrant oil. The hair, which is strained by the salty ocean water and the strong sun of Morocco while surfing, a portion of argan oil after washing, in fact, only good.

There is no question about what your next souvenir from your surf holiday in Morocco will be, because there is no way around real authentic argan oil. It can be found everywhere on markets or in supermarkets.

And if the tiredness or even a sore muscle grips you: in a Turkish-Moroccan Hammam, you can relax and regenerate. The Arabic tradition is the perfect reward after a long day of surfing.

Climate, hours of sunshine and water temperature in Morocco 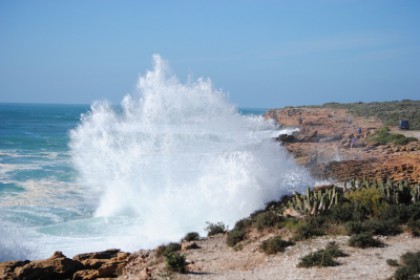 A wetsuit is definitely useful in most months of the year. You need a wetsuit to surf in the cold Antlantik in most months. Worthwhile is to bring your own from home, because even if wetsuits are rentable in the surf camps in Morocco, not everyone likes to rise into inappropriate or worn suits.

Moderate temperatures expect surfers in the north of the country. Nevertheless, it can be up to 37 degrees in the summer months. The average is around 25 degrees and is therefore very warm. In winter, a lot of rain falls. Colder than 6 degrees it rarely gets, but in the winter months it can even snow, even if this is rarely the case.

In peripheral parts of the Sahara in the south of the country, the climate is drier and hotter; it hardly rains. In summer the scirocco blows in this area, a wind from the Sahara.

Here you can find all average air temperatures and also the rainy days in Morocco.

Agadir Airport, known in Morocco as Al Massira, is the best destination for surfing vacationers wanting to stay in a surf camp in central Morocco (Taghazout, Tamraght, etc.). The international airport is located near the coast and therefore has an optimal short drive to the northern coastal towns.

Many German airlines, such as Air Berlin or the British budget airline Easy Jet, serve the small airport regularly.

If you want to try surfing in Morocco on its southern coast, you can do better with the Casablanca airport. The possibility of direct flights from Germany, for example with Lufthansa, make it so popular in this country.

Surfing in Morocco is an absolute dream! Especially for longtime fans of our beloved water sports are the original sandy beaches and almost perfect waves of Morocco ideal.

So what are you waiting for, discover a fantastic surf with a touch of 1001 Nights.