In our surf wiki you will find the explanation for many terms of surfing. Now you know what surfers are talking about! :)
If we forgot other important terms here in the list just send us an info to mail@stokedsurf.net

An aerial is a normal air trick. So similar to an "air" trick in snowboarding or skateboarding. There are also some variations of the aerial, for example with grab or rotation. 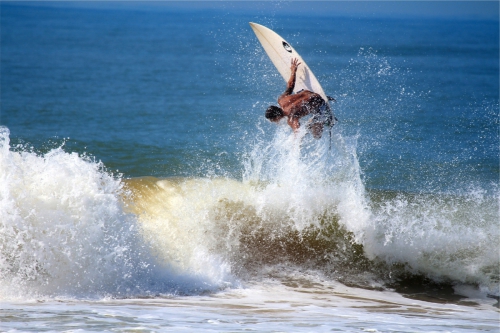 An A-Frame is a type of Break where the waves are breaking and running to both sides. So an A-Frame always generates both waves, lefts and rights.

A board-sock is a thin covering/wrapper for your board. It can not be compared with a normal boardbag, but it protects your board at least from scratches and some little hurts.

Bottom-shape is the shape/design of the bottom side of your surfboard. It is an important factor for the performance and wave range of your board.

These are the most common bottom-shapes:

You will find more informations about the different bottom-shapes and und their impact on performance in this post.

The Bottom Turn is on of the main manouvers in waveriding. You ride the wave straight down to the bottom o fthe wave and then turn the board back towards the waveface and drive up again to the lip of the wave.

In the following video you can see how to perform a bottom turn the right way.

Not every surf spot has a channel, and whether a channel works well or does not work well depends on the tides.

TIP: Just look first at where the waves break and where the experienced surfers go into the water to get out of the line-up faster with the help of a channel. Of course, out there in the "green line-up" between the experienced surfers, you only have to look for something, if it already corresponds to your skill level (surf level), to position yourself correctly in the line-up, paddle green waves and surf it.

The Cut Back is also one of the main manouvers in surfing. This manouver is more used by the advanced or pro surfers. This manouver is generally used to make a hard turn to go back in the direction of the breaking more powerful wave section. It is common to perform a cut back after you have done a top turn.

With a cut back the surfer can take new power from the most powerful section of the wave and so he can also generate new speed from it.

In the following video you can see how a Cut Back is performed the right way:

A ding is a damage of your surfboard in general, like a break, a cut, or a hole in the surface of your board. Little dings which comes from your footprint are not a real damage of the board are called "pressure dings" and are very usual on waveriding boards, especially on light polyester-boards (PU).

The expression "Down the Line" describes the situation when you surf a green wave at the open face and drive down sidewards in the perfekt line. This is usually e.g. after the take-off or after a top-turn maneuver. 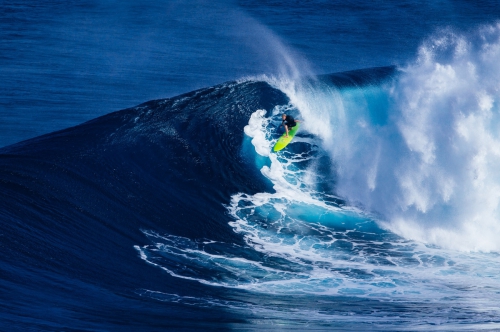 Duck-dive is the maneuver when you dive with a surfboard under a wave and it does only work with a shortboard or a fish- and a hybrid-board without high volume. For this purpose you dive into the water just before the wave, or the white water, lying on the surfboard deep with the nose of the board and so dives with a subsequent upward movement under the wave. This maneuver needs a lot of practice until it works properly. A Duck-Dive is important for every Shortboard-Surfer to get out in  the line-up as fast as possible. 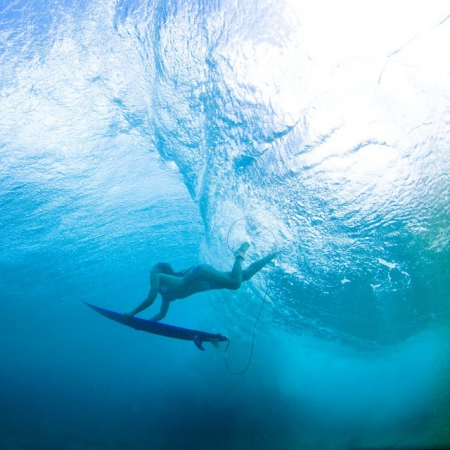 The Ground Swell is the fundamental wave movement of the sea under water. For a really good wave, a strong ground swell is also necessary, which moves under water and then runs on the shores on sandbanks, or riffs, and thus a powerful wave can build up.

The leash is the line that connects you and your surfboard. The leash is always attached to the rear foot of the surfer (regardless of whether you go regular or goofy). When you fall from your board into the water, the Leash will help your surfboard stay in range and you can pull it back to you quickly and it will not be carried away from the waves of you.

The line up is the entire line, or area where the surfers sit at a surfing spot in the water and wait for their waves (lines). So actually the entire area in the water in which is surfed.

Locals are called the local surfers, which are found at a surfspot so. As everywhere and in every country in the world, there are friendly locals and the kind of locals who are rather annoyed by the many foreign surfers and do not want these surfing their homespots and waves. The latter is often referred to as "much localism".

The nose is the "nose", the front part of your surfboard. A wider nose for a surfboard provides e.g. more buoyancy and gliding speed and is often used with mini-malbus, longboards, fish and hybrid boards.

The peak is the point in a line-up where the wave begins to break and where therefore is the best starting point for the surfer's take-off. A wave or the lineup of a surf spot can also have several peaks. This is usually the case at beachbreak spots, and at a pointbreak spot as often found at reef breaks, there is usually only one peak.

A pointbreak is a type of wave break where the waves always break in the same place and the main peak is not changing its position. This kind of waves are very predictable, but the lineup at Pointbreaks is naturally also clearly fuller, since there is just the one "starting point" (peak) in this kind of wave.

The rails are the side edges of a surfboard. There are also different rail types, which are more or less suitable for different conditions.

There are, for example, softer rails, medium rails and hard rails

You can find out more about the various rail types of a surfboard in the following article.

The Rocker is the bend of a surfboard. Different rocker templates are suitable for different types of waves. For example, a strong rocker rather good for bigger powerful steep waves and tubes. Whereas a soft rocker to medium rocker is better suited for simple not so steep waves. A lower rocker also builds up more speed and makes the paddle easier and faster paddling.

You should also differentiate the rocker of a surfboard between nose rocker and tail rocker.

In the following video the different rocker types are explained exactly:

Spray is the water fountain, or water splashes, which are thrown out by the fins into the air when performing a radical top turn or snap.

But there is also a second meaning of the word "spray" in the area of ​​waves. Its the spray design, which you can put onto your surfboard. Some beautiful designs are sprayed onto the bare surfboard to beautify it a bit. 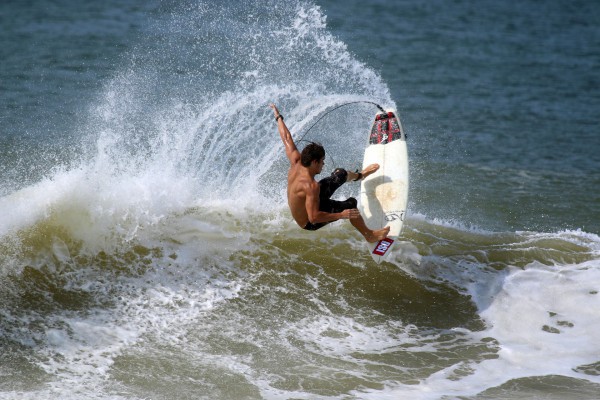 The stringer is the thin long wood, which runs through many surfboards in the center of the surfboard from Nose to Tail. The Stinger is usually used with the classic polyester construction of surfboards and consists of balsa or bamboo wood. The stringer gives more flexibility (flex) to the board.

The tail is the last back piece of your surfboard and starts roughly from the Finns. See also the next item "Tail-Shape".

The tail-shape is the shape of the surfboard tail, the back of your surfboard. There are many different tail shapes that provide different driving behaviors and are therefore better or worse suited to different waves and conditions.

You can find out more about the different tail shapes and their effects on driving behavior in the following article.

Takeoff is the process of standing up on the surfboard. So the moment when you first paddle a wave and then with a quick set on the board and you stand.

In the following video you can see how to do the take-off:

The top turn (or also called roller) is another basic maneuver in the wave. It is the turn, ie the rotation at the upper part of the shaft, just below the corrugation (wave-lip). The top turn is usually done after a bottom turn to go back upwards in the direction of the shaft crest, then the shaft can again be driven downwards.

In the following video you can see how a top turn is performed the right way:

The traction pad or tail-pad is a pad made of foam material, which ensures that you have with your back foot a non-slip surface and good hold on your board. It is always placed at the back of the tail of your board. However, a traction pad is only needed for shorter boards such as shortboards, fun boards, fish and hybrid boards. For longer boards such as a Mini-Malibu or Longboard, normally no Traction-Pad is required, as these boards are generally not so far behind and here a proper wax layer as a full grip is sufficient.

The Turtle-Roll is a maneuver which is used rather with longer and heavier boards like Mini-Malibus and Longboards. The turtle roll is another way to come through the opposing waves. For this purpose you place your board horizontally to the shaft (that is, long ago to the shaft) and clasp the board at the side edges with both arms firmly. Shortly before the waves roll over, one rotates with the board once on the back, so that one itself under the inverted board is under water and the wave rolls over one.

The wind swell is the second type of wave movement in the sea. It is the wave movement of the sea that is created only by wind and storms over water. The shafts, e.g. on good days also in the Baltic Sea, are almost exclusively caused by strong wind swell (ie strong winds and storms). In general, one can say the Groundswell produces larger and stronger waves than Windswell.

A wipe-out is the situation when a surfer falls in the wave after the take-off or while surfing down the line. And the wave then takes the surfer with it and violently throw him through like a washing maschine or when the breaking wave claps on the surfer with full force from above. 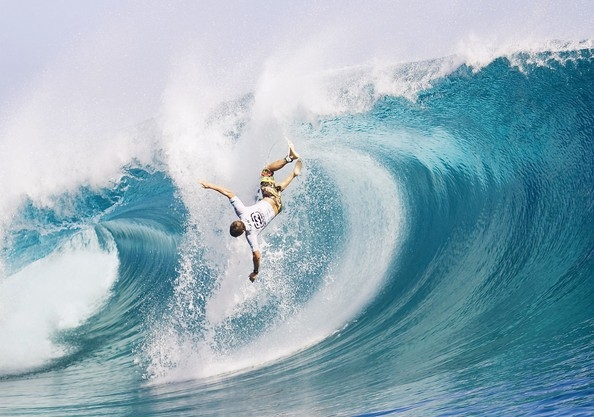